The title of this post says it all. It's the word that can bring a newly diagnosed Celiac to her knees. The word I cried over at mealtimes those first few months. Bread.

Now I've never been huge into sandwiches. I did the low-carb thing for a summer. I know that bread isn't really even that "good" for you. But nothing can compare to that fresh out of the oven buttery goodness of homemade bread with some of my mom's elderberry jelly. or a BLT. It's BLT season and it's just not the same without some toasty bread.

So, as most GF-ers do, I began my quest for bread. I found a bakery in Toledo, Ohio that sells delicious GF bread... and they ship, too! It's pricey, but a worthy treat. And good bread for me has always been a treat. I'm not a Wonderbread kind of girl.

Still, there was something about not being able to bake by own bread (from scratch, no mixes) that bothered me. My mom is famous for making bread. She and my aunts make wonderful rolls and breads for holidays and family gatherings. So, I tried to make my own. Many were abysmal failures. One the dog wouldn't even eat.

For my birthday I asked for a King Arthur Flour GF bread pan and some flour. I was ready to try again. That same time a friend posted her latest grain free recipe on Facebook. That settled it. I came home from work that Friday night and set my attention to making bread. 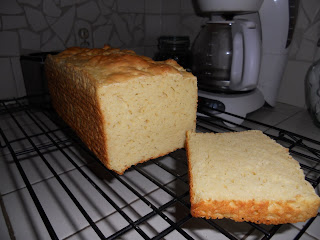 Using my King Arthur GF Flour, bread pan and their recipe, I made my first batch of respectable gluten free bread. Not quite as light and airy as the pictures on their web site, but delicous and buttery. So good my husband ate a grilled cheese sandwich out of it and hugged me. 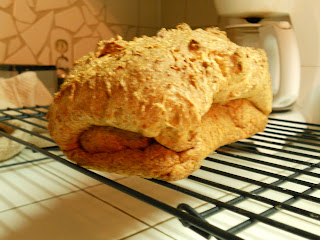 The second loaf was totally different in ingredients and techinque. The dough was much less manageable. In fact, after the dough engulfed my hand mixer, I had to finish by hand. The resulting loaf was edible. The flavor was good, but the texture was dense and the loaf misshapen. I am confident that if I had used a stand mixer it would have been better. I also ground my own bean four for the recipe and using purchased bean flour might have helped, too. But, I was feeling ambitious and had read that white bean flour ground fresh in your coffee grinder is more delicious than chickpea flour you buy in the store. I am not a fan of the chickpea flour. I am one of those people who notices the "beany" taste in bean flour recipes. But, the bread did not have that taste, so maybe grinding my own beans helped... I won't know till I try it again. But I won't be trying this recipe again until I get a stand mixer.

The Moral of The Story. (or) Abbie Needs A Stand Mixer.

I am pretty confident that for gluten free bread baking, a stand mixer is a big help. But, if all you have is a hand mixer, you can still get a good loaf of bread. It's worth the trial and error when you have that first grilled cheese, or BLT, or almond butter and jelly...

If you have any suggestions for gluten free bread recipes, tips, or tricks (or stories of comedic failure) please share them in the comments section!
Posted by Abbie at 12:19 PM 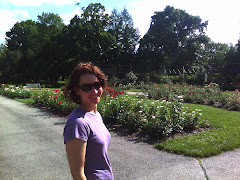